My Glasgow My Subway

The Glasgow Subway is part of the fabric of the city.

While thousands of people use it regularly, for others it can literally be ‘out of sight and out of mind’.

Therefore, to get people to change their habit and use the Subway, we needed to convey the many benefits in a clear and compelling way.

We decided that people had to be at the heart of what we did, and their life journeys (both literal and figurative) would form the stories that we would tell – demonstrating how the Subway seamlessly connects people and places in Glasgow, allowing life to flow.

These stories would be told in radio ads, social media films, a TV ad and outdoor display advertising.

Get in touch with us today

On radio, we created 15 ads which connected sequentially in the order that the subway trains travel around the route.  Each ad would focus on one stop, one person or group of people, and their reason for going there. The ads would be ‘paired’ in ad breaks – one ad playing as the first ad of the break, the second ad playing as the last ad in the break.  Our audience would be taken from one to the other in a few minutes, simulating the speed and ease of using the subway. (Recordings were even made of the Subway’s distinctive sounds, to capture it’s unique feel)

In the social media films, we created visual interpretations of the radio ads, featuring the same individuals’ stories.  These were filmed at locations in and around the stations, further demonstrating how well-placed the Subway stations are.   We used a monochrome and orange colour palette to ensure continuity with the Subway’s brand guidelines.

The TV ad followed very much in step with the social media films, combining a number of the people and places featured in them, and further detailing the Subway’s unique selling points.  We did this by subtly evolving ‘My Glasgow, My Subway’ to succinctly depict the USPs – ‘My way to avoid the traffic’, ‘My money saved for the weekend’, ‘My chance to relax’, and so on.

For the display ads, we created photographic montages of landmark locations in the area around each of the 15 subway stations, but with people at the heart of the design.  Each ad also features a quote from the respective radio/social media ad – to maintain the personal, authentic feel.

By using the combined experience, talent and resources of the Bauer Create team, we were able to produce all the Creative work in-house, on schedule, and for a fraction of what it could have cost elsewhere.

The result is a campaign which is fully integrated, contemporary, innovative, and most importantly of all – highly effective. 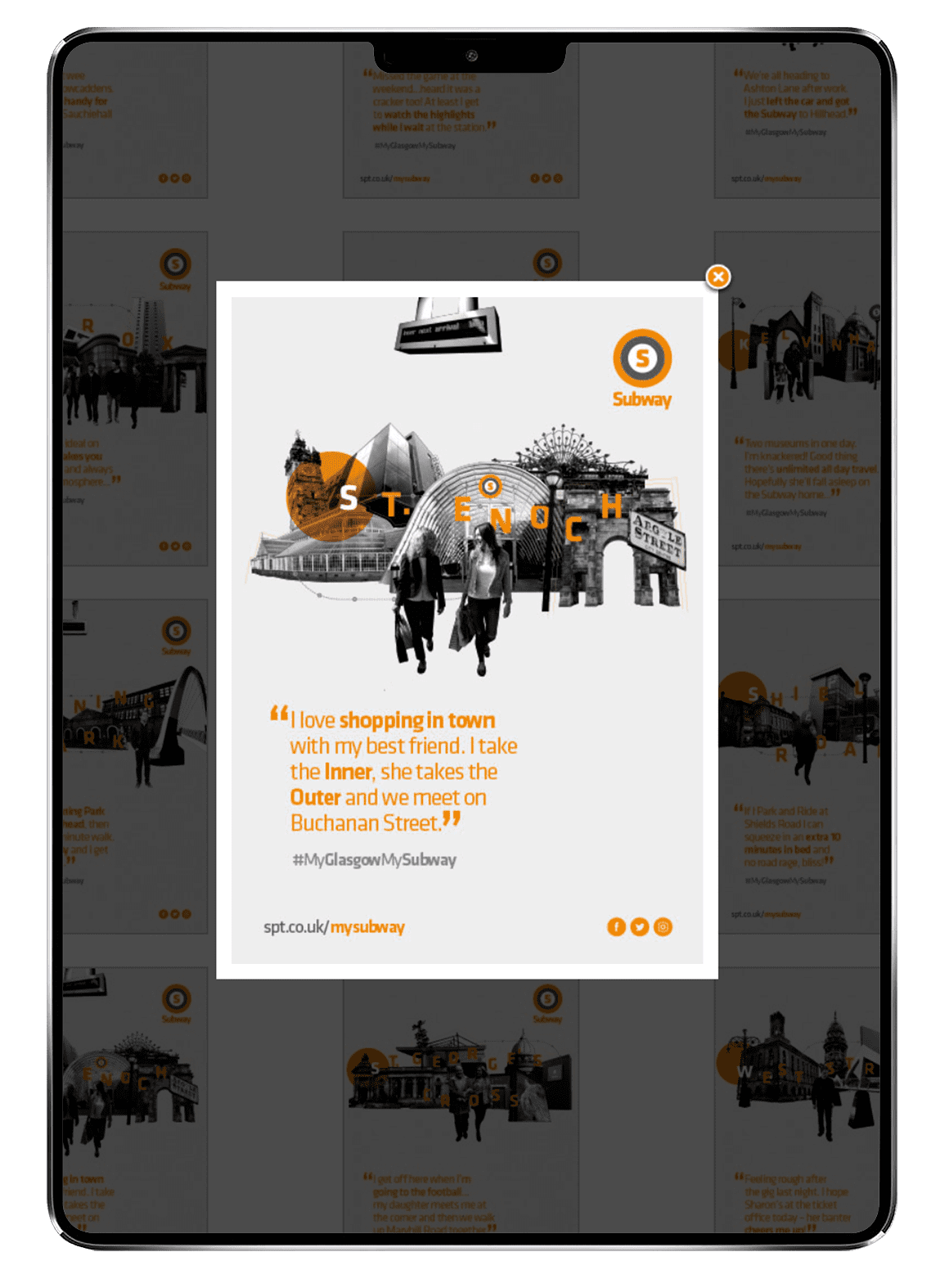